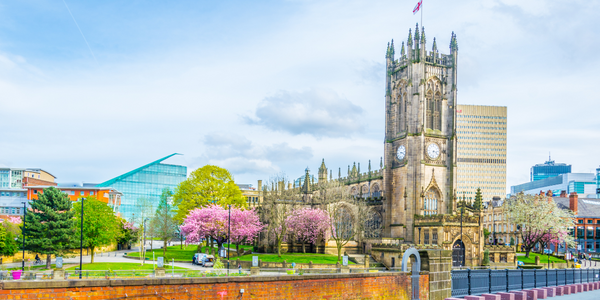 10 of the Best Things to Do in Manchester

Manchester is one of the largest cities in the UK, often being referred to as the ‘London of the North’. Home to one of the most successful football teams in the world and the birthplace of countless global bands, this northern city is bursting with culture.

Luckily for you, Manchester is also bursting with things to do!

Whether you’re just going for the day or planning on staying for a long weekend, there’s plenty of attractions to visit that’ll certainly keep you busy during your trip.

Don’t worry who you bring with you either, it’s great to go with friends, family or your partner. Manchester is a city that truly offers something for everyone.

So, here’s a handy guide to 10 of the Best Things to Do in Manchester. 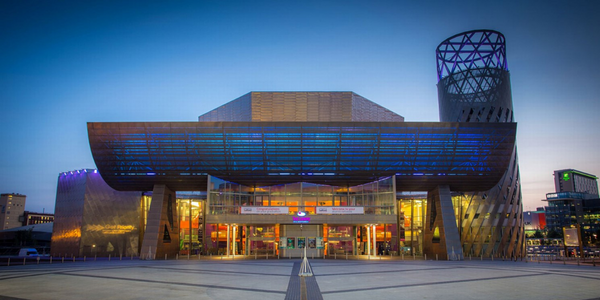 The Lowry is an architecturally stunning theatre and gallery complex known for housing the work of its namesake, L.S. Lowry, as well as hosting world premieres and west end successes in either of its two theatres.

Fun fact: ‘The Lyric Theatre’ is actually the largest stage outside of London! With capacity to seat up to 1,730 people and with seating designed by Ferrari, this performance space is sure to live up to your expectations.

Situated in Salford Quays, this wonderful waterside location is just a 15 minute tram journey from the city centre and has built a reputation as one of Manchester’s most famous landmarks making it a must see during your visit. 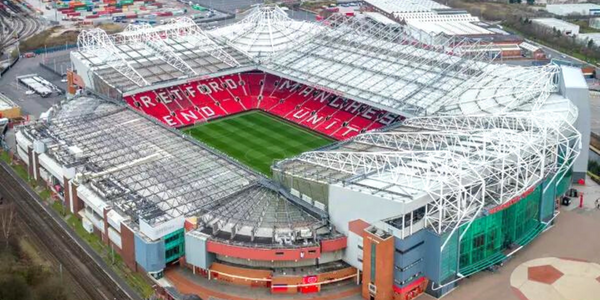 The Theatre of Dreams – home to Manchester United Football Club.

Arguably the most famous football club in the world and unquestionably one of the most successful, the Red Devils certainly have a stadium to match the stature of the club.

With an official capacity of 74,310, Old Trafford is the biggest club stadium in the country by over 11,000 seats!

Book yourself a tour to gain a behind the scenes look into this breathtaking stadium and walk in the footsteps of greatness. You’ll be given exclusive access to the dressing rooms, tunnel and pitchside dugouts.

Once you’ve finished exploring the ground, be sure to visit the Manchester United Museum to marvel at the club’s rich history. 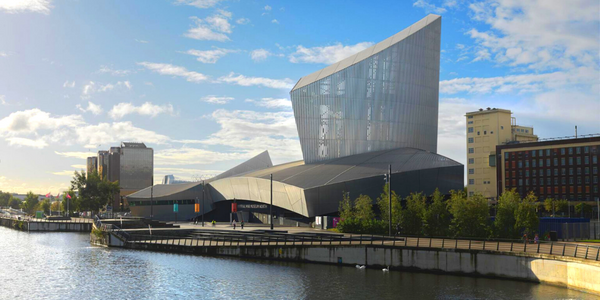 Discover how war shaped your own life at the Imperial War Museum North.

When in fact, it’s designed to represent a globe shattered by conflict. The globe being split into three pieces, and though it’s been put back together, it will never be the same again. Making the building a symbol of the effects of war.

Once inside, Libeskind wanted visitors to feel the unsettling nature of war and consequently made the building purposely disorientating. He used a variety of clever techniques within the architecture to do so.

One of which was to make the entrance small and bunker-like and guide visitors along a pathway that bends back on itself – creating a feeling of disorientation. Find out more fascinating facts about this iconic building here.

As you walk around, you’ll find objects which have changed the course of history including the Field Gun which fired the first shell of WWI and a large section of twisted and rusted steel work from the collapsed World Trade Centre. 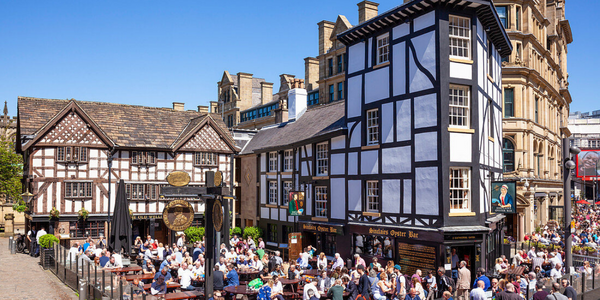 Housed in a beautiful Tudor building in the centre of town, just off Exchange Square, Sinclair’s is home to one of the city’s largest beer gardens. But this is no secret to the people of Manchester. Meaning it gets very busy whenever the sun decides to come out!

The bar itself is very atmospheric and contains many nooks and crannies to nestle in, making it a cosy option on a cold night.

First opening in 1720, Sinclair’s has stood the test of time… for the most part at least! After gaining substantial damages in the 1996 IRA Manchester bombing, Sinclair’s was upped and moved, turned 180 degrees, and rebuilt brick-by-brick where it stands today. 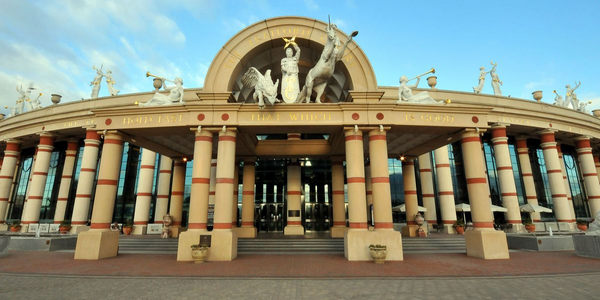 So much so, that we’d recommend setting aside an entire day to give yourself enough time to fully explore everything on offer.

With over 200 shops, a 20-screen cinema, and even an adventure golf course, the Trafford Centre has something for everyone. Not to mention the gigantic food court with over 30 restaurants making it one of the biggest in Europe.

Getting to the Trafford Centre couldn’t be easier. With its own dedicated tram stop and 11,500-space car park, you’ll be sure to have a stress-free journey whatever method of transport you wish to arrive by. 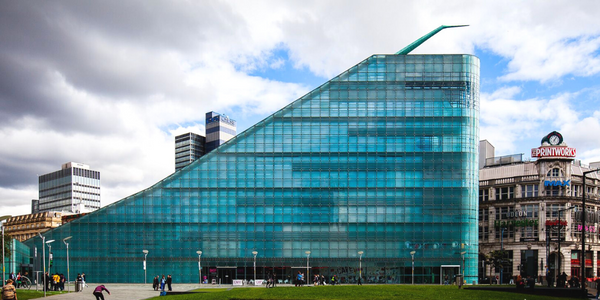 Given Manchester’s deep football heritage, it’s only right that the city was chosen to house the country’s dedicated football museum.

The National Football Museum is a striking glass structure sandwiched between the Corn Exchange, Printworks, and Victoria station making it super easy to access. With over 140,000 football related items on display, the Urbis building is the largest football museum in the world!

Discover the evolution of the beautiful game as you explore through items such as the 1966 World Cup Final ball and Maradona’s iconic ‘Hand of God’ moment shirt.

Get involved with the interactive events and take a penalty through the old Wembley goalposts and get analysis on your kick’s speed, power, and precision.

Fancy something less physical? Then try your hand at calling the action and reliving some classic goals in the Match of the Day Commentary Challenge. 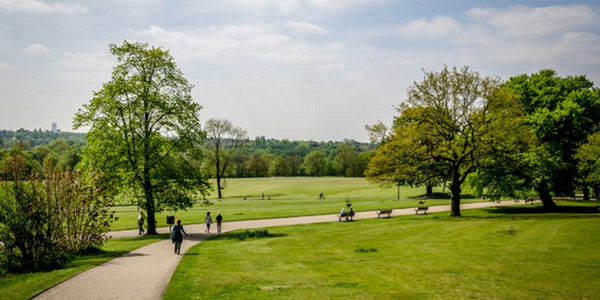 If you’re lucky enough for the sun to be shining during your trip to Manchester then take advantage of this rare opportunity by visiting the vast Heaton Park.

At an impressive 600-acres, Heaton Park is the largest municipal park in Europe and being just a 20-minute tram journey from the city centre it couldn’t be easier to access.

Unsurprisingly, Heaton Park is packed with things to do.

From feeding animals in the animal centre; to having a coffee and bite to eat in one of the cafes; to letting the kids run wild in the play areas; and even to getting out on the water in a rowing boat or pedalo, Heaton Park has something for all ages.

Head into the sprawling woodland of Heaton Park and you’ll find the spectacular aerial adventure that is Treetop Trek Manchester. Swing, balance, and fly your way through the 36 breath-taking obstacles and zip wires in the full trek, or for the younger ones, opt for the shorter and lower mini trek.

After first opening in 1823, this Grade I listed building has amassed a collection of over 25,000 items making it a must visit for any artwork fanatics. The impressive collection includes over 500 sculptures and paintings by renowned British artists as well as craft and design objects like glassware, furniture, and wallpaper.

In addition to the regular programme of events, the gallery hosts special exhibitions throughout the year so be sure to check out the timetable before visiting to ensure you don’t miss anything!

Head to The Gallery Café once you’ve finished making your way round and indulge in Adam Leavy’s masterful creations. Being a former MasterChef: The Professionals finalist, you can expect the food to be suitably mouth-watering! 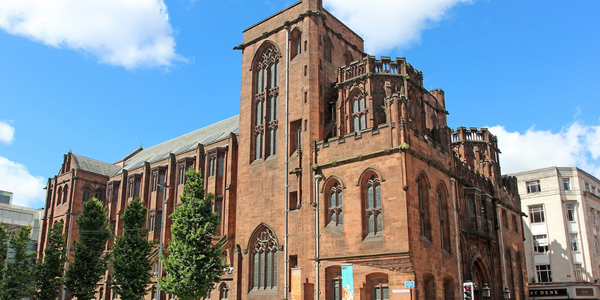 The John Rylands Library is an imposing piece of neo-gothic architecture situated on the historic Deansgate street. Arguably the most enchanting building in the city, the Grade I listed library is often said to be a real-life Hogwarts.

Step inside and you’ll notice how overwhelmingly grand this library is with architecture that wouldn’t look out of place in a Cathedral. They’ve even got highly positioned mirrors to help visitors admire the intricate patterns and carvings that otherwise wouldn’t be visible due to the overly tall ceilings.

One of the two reading rooms was purposely built 30ft above street level so readers wouldn’t be disturbed when the horse-drawn traffic passed over the Deansgate cobbles below.

I think it’s safe to say that modern day readers won’t have the same issue!

Although the building itself is seriously impressive, the collections housed inside are even more so. The library holds over 250,000 printed volumes and over 1,000,000 archival items and manuscripts including the oldest known fragment of the New Testament!

The Manchester Cathedral is one of the oldest churches in the city and can be found just off Exchange Square. Brimming with history, the cathedral dates back to the 13th century and had to be restored following a bomb during WWII that all but destroyed the interior.

Once inside, you’ll be greeted with stunning stained-glass windows and high stone archways. Pay close attention to the nave roof and you’ll notice it’s supported by 14 angels, each playing a different golden medieval instrument.

It’s still a working a cathedral with daily services where everyone is welcomed so feel free to attend them as you like.

Whether you’re a fan of history, religion, or just beautiful buildings, the Manchester Cathedral should certainly be on your list of places to visit.

Book your coach or minibus!

Thinking of booking transport for your trip to Manchester? We’ve got you covered, enquire here to get your personalised quote.

Find out more about our range of vehicles on offer here.